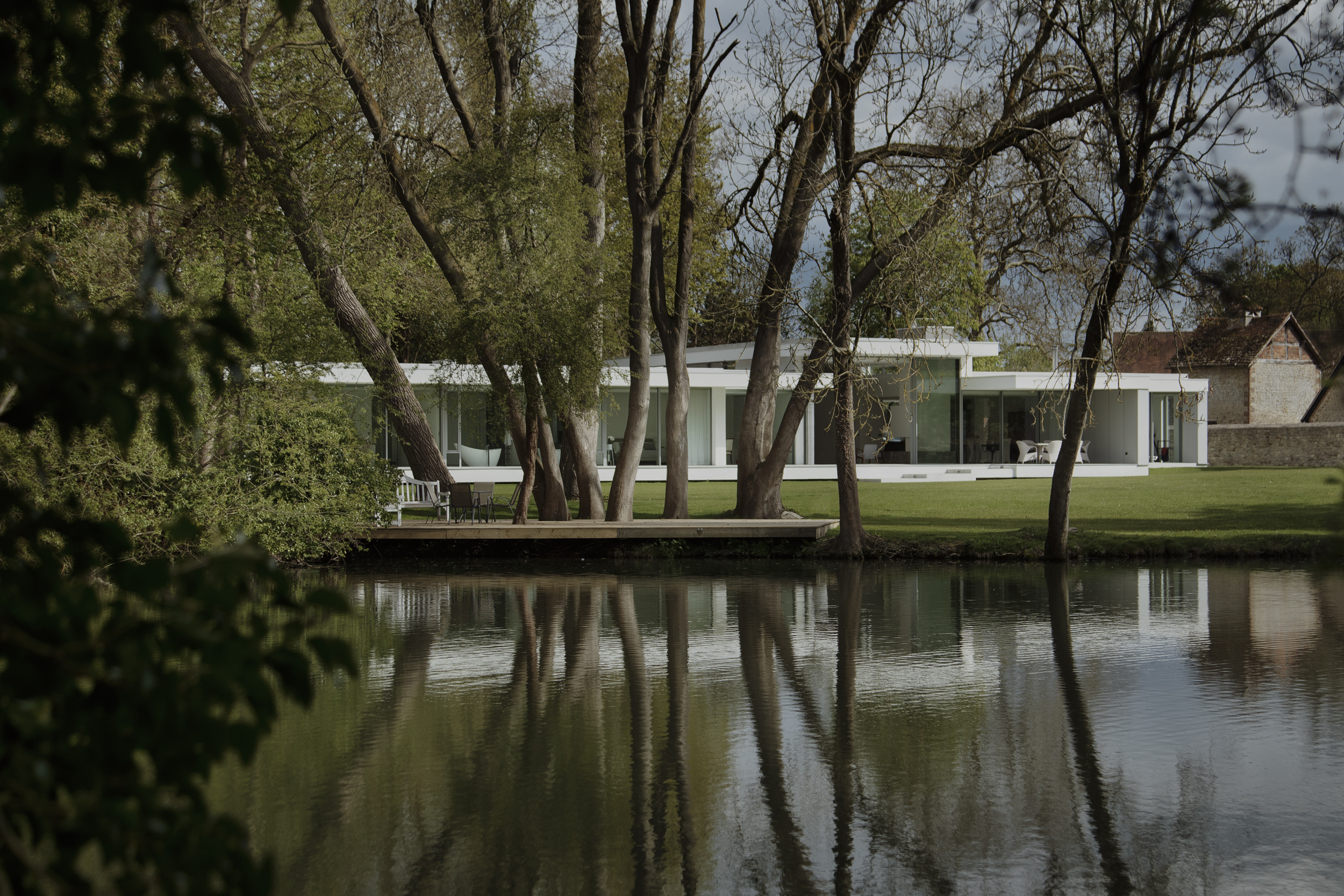 The Sunday Times: A modern Noah’s Ark on stilts

Our clients spoke to Hugh Graham at The Sunday Times about the flood prevention design of their contemporary new riverside home in Oxfordshire.

Tom and Maggie Walsh are living on the edge in their retirement. The couple have just built their dream home in a flood zone on the banks of the Thames in Oxfordshire. According to UK climate change projections, average winter rainfall in England could increase by 41 per cent by the year 2050, and peak river flows could increase by 50 per cent.

There has been significant flooding in the Thames Valley in 2000, 2003, 2007, 2012, 2013-14 and 2019-20. Yet the Walshes are not losing any sleep. That’s because they are living in a floodproof house. “It is quite a high-risk area but we are covered for events for 200 years,” says Ben Holland, partner at HollandGreen Architecture, Interiors & Landscapes. “As it gets worse and the apocalypse comes, if it happens, this will be the last house to go.”

“I think the term biblical proportions was mentioned in terms of what it would take to flood this place,” Tom says.

So what’s the secret of this modernist Noah’s Ark? It is raised 525mm off the ground, but you can’t tell: the stilts are invisible. That’s because the house is all white and the stilts are black, hidden in a shadow gap, tucked half a metre back from the edge of the house. The effect is like a house floating on a lawn: Mies van der Rohe meets the Millennium Falcon.

It was a daring build in their retirement. Tom and Maggie returned to the UK a decade ago from South Africa, after 41 years of living abroad, to be near their two daughters. They looked for the perfect house but couldn’t find it, so decided to build one — their only requirement was a beautiful view. They came across this 1.5-acre plot in 2015 — a dilapidated tennis court on the grounds of a 200-year-old manor house and next to a 350-year-old barn. It was being sold with planning permission for a bungalow: anything higher would have marred the view from the manor house.

“Being retired, we fancied lovely, light rooms; we didn’t want anything dark and cottagey,” says Maggie, whose previous home was a thatched cottage outside Johannesburg but who loves Bauhaus architecture and the Barcelona Pavilion. “The council didn’t want a pastiche of a period building. There were a few concerns among locals we were building a spaceship and spoiling the village, but the council wanted the house to reflect the 21st century and we were happy to go along with that.”

As the world wakes up to climate change it sounds surprising that planners would permit a new house in a flood zone 2 — which means there’s a moderate chance of flooding — but Holland executed a flood risk assessment, crunched the numbers of future projections and calculated that a height of 525mm was more than enough breathing room. “If the land ever does flood, the water would go right under the house.”

Insurers, however, don’t know what to make of it. The Walshes made initial inquiries to online providers, who refused to quote for a house on the river; other insurers were not familiar with houses on stilts, so the Walshes eventually found a specialist firm to back them.

If you’re building in a flood zone you must ensure the new house doesn’t displace water, causing flash floods somewhere else. So there is no hard paving here, but a gravel drive to absorb water. Maggie was worried it would be difficult for women in heels, but the gravel is built using a honeycomb system, so it sits quite firmly and looks neat. The flat roof has internal drains that funnel water into a big soakaway tank in the ground. The rainwater then soaks into the garden and gradually back into the river.

It’s a zen place for retirement. The cantilevered roof lets them sit outside in all weathers. “It’s lovely to sit and listen to the rain,” Maggie says. On hot summer days they slide the glass open on both sides of the house to let a breeze flow through, just like in South Africa. “We’ve got lots of ventilation; it’s a very Covid-friendly house,” Maggie says.

Their mechanical ventilation with heat recovery system, which pushes out stale air and draws in fresh air, also makes them feel more Covid secure. “We had it on when we had our cleaning lady around today,” Tom says.

Despite its clean, white look they say it feels cosy — there’s a gas fireplace and underfloor heating — and the whiteness survived Christmas, with visiting children, intact.

Life by the river is idyllic, especially the sunset jaunts on their river cruiser. It’s not entirely private — a glass house provokes curiosity among walkers on the river footpath or boaters. “They just wave or have a glass in their hand and say cheers,” Maggie says.

There is wildlife to watch too — birds, swans, squirrels, badgers — even if Maggie is not enamoured of the 50 Canada geese on their lawn.

“The house is calming,” Maggie says. “You do spend a lot more time at home when retired. For your wellbeing I think it’s good for you to have light and space and the outside-inside feel.”

Do they get nervous when it rains heavily, with the river 50 metres away? “When the flood came last year it came just to the bottom of the garden,” Tom says. “And the Thames is the best-controlled river in the country as far as flooding is concerned. I am not worried.”

And if all else fails, Tom jokes they have a backup plan: “We have a ladder on the side of the house to get on to the roof, so we can jump up there if needed.”

Article from The Sunday Times